How to build a brand persona on social media – part 1

Social media should be an integral part of every brand’s marketing strategy. But to succeed on social, you need to know how to build a brand persona.

To illustrate our point, we’d like to tell you a little story about chicken.

Last month, a 16-year-old named Carter from Reno, Nevada had a craving for chicken nuggets. In a bid to satisfy it, he took to Twitter. 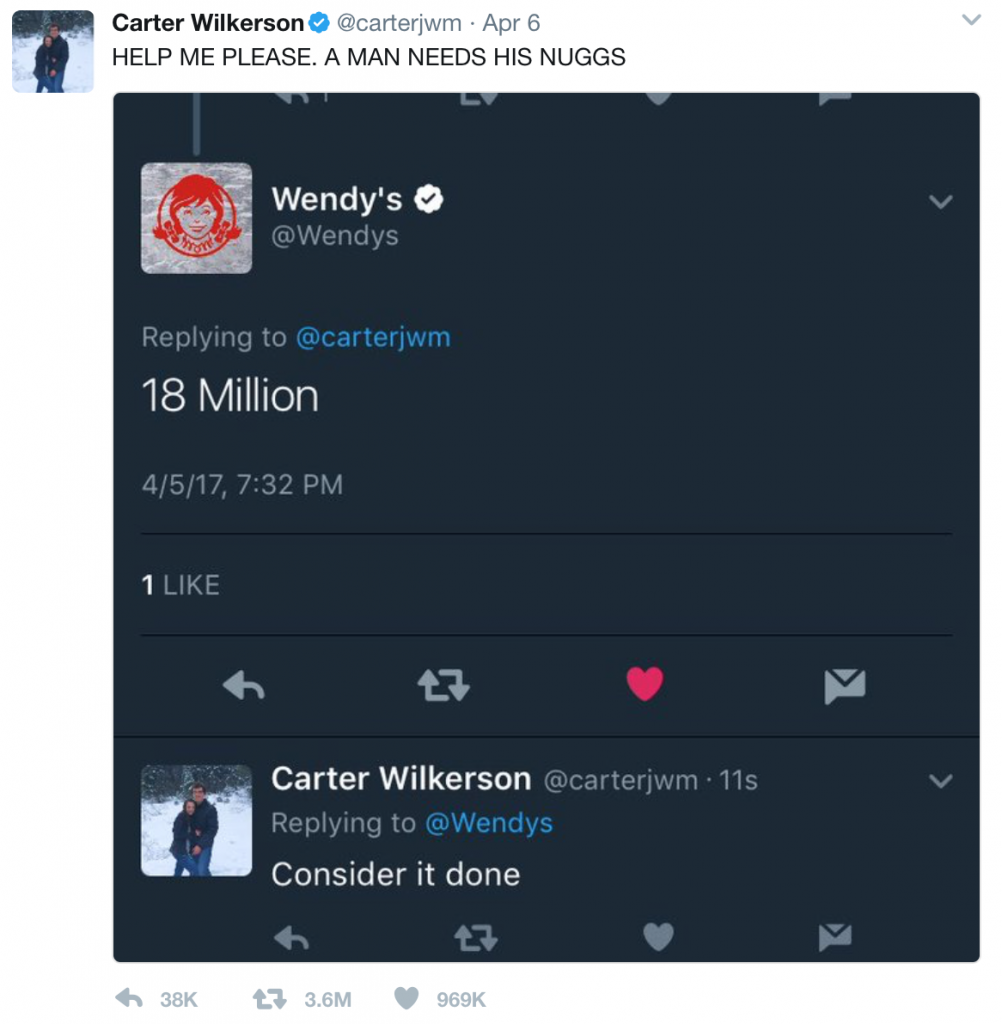 He then posted a screenshot of the tweet, accompanied by the plea ‘HELP ME PLEASE. A MAN NEEDS HIS NUGGS’.

Helped along by global brands including Google, Amazon, Microsoft, Apple Music, and even Twitter itself, Carter’s tweet soon overtook Ellen DeGeneres’ famous Oscars selfie to become the most retweeted tweet of all time.

A PR win for Wendy’s

What started out as a light-hearted response to a teenager’s tweet turned into a PR grand slam for Wendy’s.

John Harrington, deputy editor of PR week, told the BBC: “Most brands would probably have ignored the tweet or given a bland response, but by reacting with humour, Wendy’s has created a vast amount of positive exposure and goodwill.” 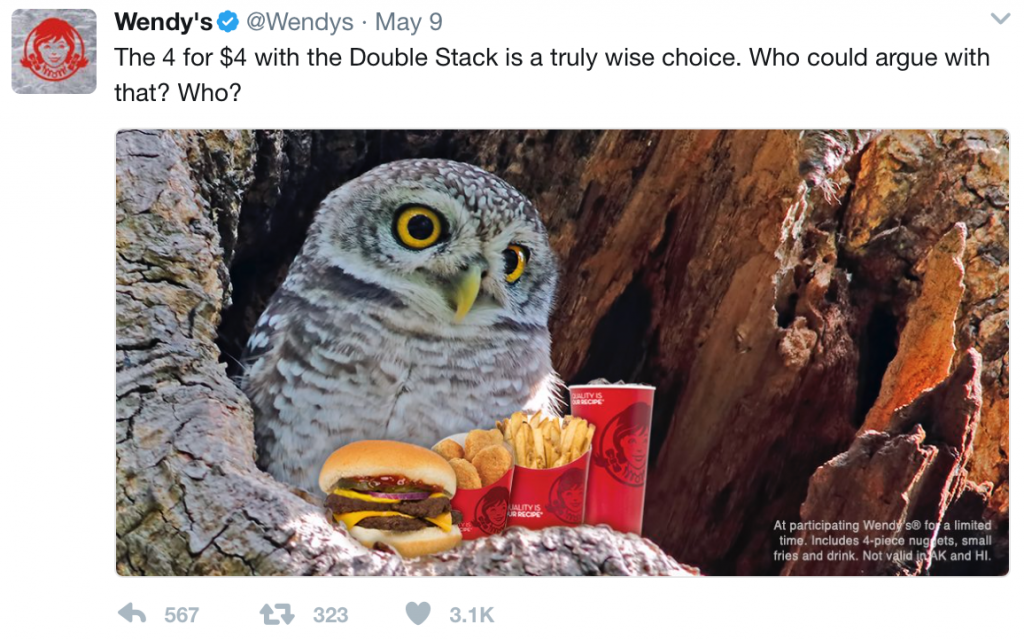 Their tweets are friendly, funny and distinctive. The company’s response to Carter’s tweet was in keeping with this persona – and it really paid off.

What Wendy’s did right

First of all, there was the response itself. They could have just ignored Carter’s tweet – but instead they interacted personally and with humour.

Then, once the tweet gained traction, Wendy’s jumped on the bandwagon. 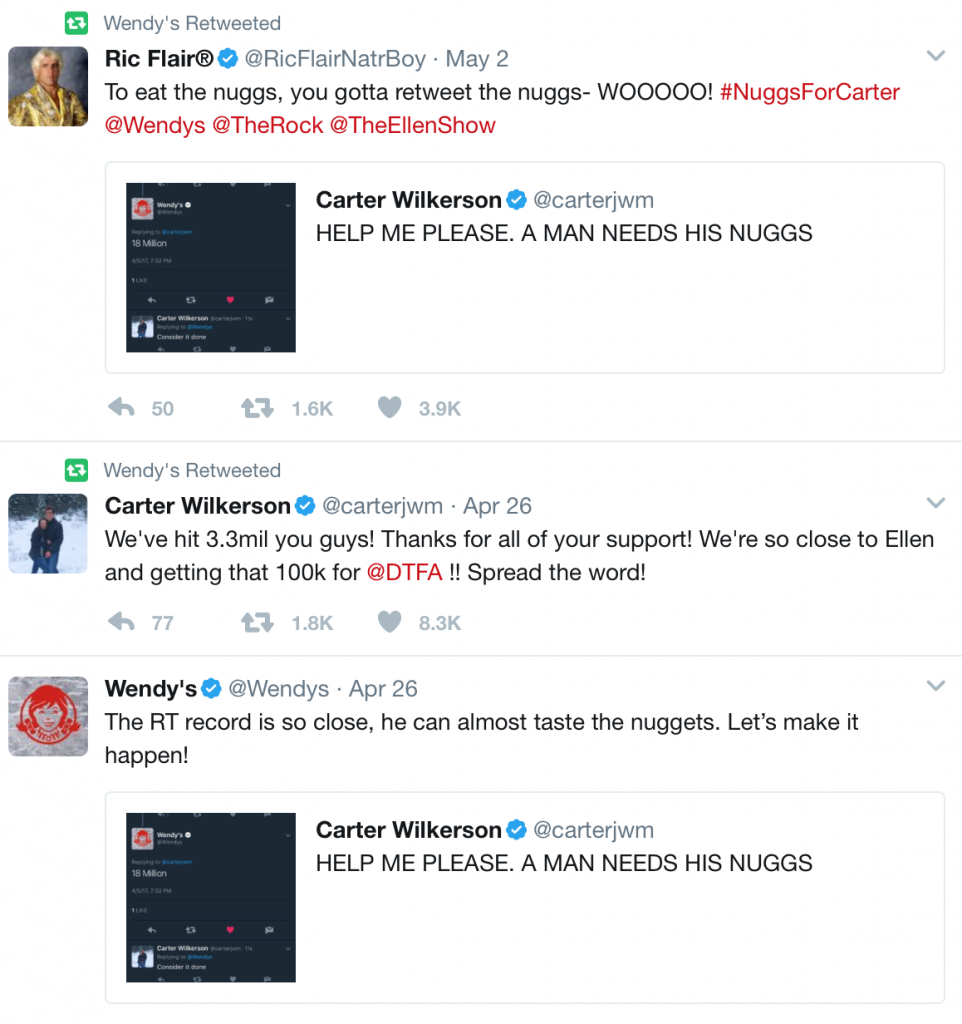 When the retweets didn’t stop, Wendy’s promised to donate $100,000 to charity if Carter’s tweet overtook DeGeneres’ – thus fuelling the Twitter storm even more.

Wendy’s knew that with every retweet they’d get a little bit more exposure, and by promising to donate to charity they helped establish themselves as a caring, socially-minded brand.

When Carter’s tweet topped DeGeneres’, not only did Wendy’s donate the money – they also awarded the teenager his year’s supply of nuggets, further cementing their friendly, feel-good persona.

How to build a brand persona on social media

A strong brand persona can take your social media game from good to brilliant.

Social media marketing is about establishing relationships with your audience. Building a distinctive, consistent persona is a great way to do that.

A brand persona helps to humanise a company, enabling customers to trust and relate to it. And the more your customers trust you, the more loyal they’ll be: in a study by Rare Consulting, 83% of consumers said their loyalty to a brand was driven by trust.

Sounds good, right? Well, stay tuned for our next blog in a few weeks’ time, when we’ll show you how to build a brand persona for yourself.