How to use Twitter for your business: Beginner’s guide part 2

Welcome back ladies and gents.

OK so the more dedicated followers of our blog – hi guys, hope you are both well – will tell you that last time out we ran through how to set up your business Twitter account.

Hopefully your profile is spick and span now so it’s time to get started – but what’s the best way to use Twitter for your business?

Avoid anything that could be seen as gratuitous self-promotion as your audience will smell a rat a mile off.

Our advice would be to try and find that all-important sweet spot that is sandwiched slap bang in between (a) what your target audience wants to hear and (b) information that promotes your business.

But if in doubt veer towards option (a): Give people useful info, answer their questions and they will consider you a valuable member of their community.

And if you are smart you’ll keep it snappy – Tweets under 100 characters get 21% more interaction.

What to include in your Tweets to generate more interest

They say a picture is worth a thousand words. Either way it will certainly give you far more bang for your buck when you’ve only got 140 characters to play with.

And the stats prove that pics are a sure fire crowd pleaser – Tweets with images get double the interaction of those without.

But what other tricks can you pull? While you are at it, why not try asking for a retweet?

Research shows that  you have 12 times more chance of being retweeted if you ask for a “RT”. But you can go one better: Spell out “retweet” and that leaps to 23 times!

And don’t be shy about the odd retweet yourself. You never know, someone might return the favour.

Make sure you reference retweeted material by saying via@(profile) – it might get you another follower.

Interact with media outlets and blogs. Highlight positive news about your company, industry or community that your followers will find interesting.

Use hashtags to expand your audience. Tweets with a hashtag generate twice as much interaction.

Don’t go crazy though. Tweets with one or two hashtags get 21% more engagement than those with three or more so don’t go over the top.

If you can, why not jump on a trending hashtag? This really puts your company in the spotlight.

Brands milked the recent football World Cup hashtags to draw attention to themselves – particularly after the infamous Luis Suarez bite.

How to time your Tweets for maximum impact

Research has shown that Twitter engagement increases 17% on the weekends but only 19% of brands Tweet on Saturdays or Sundays.

If you only work from Monday to Friday, think about scheduling your Tweets so they appear on weekends too. 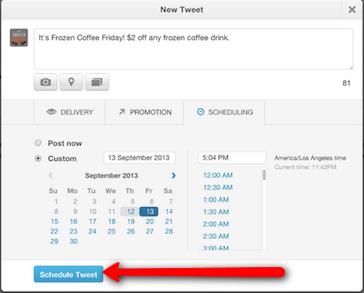 Word of warning though: Be careful not to schedule a Tweet that might no longer be true if anything changes in the meantime. Or even worse: One that might be seen as offensive if world news shifts.

The same research also revealed there was 30% more engagement between 8am and 7pm than later in the evening.

A study by Twitter backed this up – demonstrating that we are 119% more likely to be online during school or work hours. Naughty naughty.

It also revealed that users are 181% more likely to be on Twitter while commuting – food for thought when you are working out when to schedule your Tweets.

Remember though: Tweeting is free. Test out what times of day get you the most interactions, learn from it and try your best to cash in next time.

You have begun Tweeting but populating your own Twitter feed is just the start. Make sure you keep an eye on what others are sharing.

Twitter will give you some suggested pages to follow but this is only a starting point and you’ll want to expand on it.

Follow your customers. It shows an interest in them and, you never know, it might be the start of something special!

Business partners, suppliers and contractors are worth following. They’ll be likely to follow you in return and they may post material you could RT.

Why not follow your competitors? Get an inside line on their social media marketing strategy. We aren’t suggesting  you copy them but there’s nothing wrong with getting some ideas.

Twitter is an online community but you can strengthen your connections by making it a local one too.

Following businesses in your neighbourhood and businesses run by people you know are more likely to result in interactions.

Expanding your own following can be daunting but don’t worry. If you’re posting quality content people will retweet it and the more people see your content the better chance you have of expanding your base of followers.

Jump in on conversations about your business and industry.

Twitter gives you a context to connect directly with potential customers and followers in real time. Speak some sense and sooner or later your following will grow.

And finally, if you haven’t already done this, make the most of all this hard work by linking to your Twitter from everywhere – your website, your blog, your other social media pages and your email footer.

Otherwise you may as well be doing this with one hand behind your back.

So, to summarise our tips on how to use Twitter for your business…

Step 1: Upload your profile, making sure you get your message across quickly and efficiently. Link to your Twitter from everywhere

Step 2: Get Tweeting regularly – but quality is even more important than quantity. Consider pics and hashtags and time your Tweets right

Step 3: Connect with customers, competitors and neighbouring businesses and always respond quickly and helpfully to enquiries

Step 4: Muscle in on relevant discussions to get yourself in the spotlight, aim to get some retweets and make sure you retweet too

Good luck. Get in touch with us if you’d like to discuss any of these points further – we’d be only too happy to help.