Recent Penguin and Hummingbird updates: How to impress Google now

Web spammers beware: You are more firmly in Google’s crosshairs than ever before after the fifth update to the Penguin algorithm went live this week.

Chuck the recent Hummingbird updates into the mix and it’s a brave new world out there if you or your company have got your own website.

For the uninitiated, search engines like Google typically update the way they judge websites hundreds of times a year as they continually improve their system for ranking pages on their results listings.

So for the benefit of the fast-food MTV generation let’s cut to the chase and give you a list of three dos and don’ts so you’ve got a fighting chance of impressing the new and improved Google, for the time being at least:-

Make your site as mobile friendly as possible

Have duplicated copy, shallow copy or copy that doesn’t help

However, if you are more of a glass of brandy and a cigar type, here’s why the above is true – and a bit more detail on what you should and shouldn’t be worrying about:-

How Penguin and Panda have changed Google’s ranking system

The powers that be at everyone’s favourite search engine won’t go into all the details about what their algorithms reward because they don’t want to give the game away.

However it’s common knowledge that Google-friendly sites are easy to navigate, have the right balance between images and text and have high-quality content that keeps users interested – ideally with a fair bit of said content above the ‘fold’ of the page.

And it’s no secret they penalise sites that try and game the system by stuffing their text full of keywords or linking to irrelevant sites in a bid to impress search engines as opposed to users.

The Penguin algorithm – which fights against underhand tactics used by spammers – has been one of Google’s most high-profile weapons since it was just a glint in Daddy Penguin’s eye back in April 2012.

Penguin is particularly on the prowl for sites that have tricked their way up the rankings by using irrelevant paid links that point towards their pages – links that in no way enhance the user experience.

Sites that are hit by the latest Penguin update have plummeted down Google’s results pages this week and will need to remove those naughty links before they can start thinking about redeeming themselves.

This can be a slow and painful process.

Likewise, sites that were hit by a previous Penguin update but have taken steps to mend their sorry ways should benefit from this week’s update and start being welcomed back into the fold.

It’s basically one big game of musical chairs and Mr Google’s got his hand on the stereo.

If all this chat about algorithms is wetting your whistle – and why on earth wouldn’t it? – you’ll be glad to know the mighty Penguin is merely the tip of the iceberg.

Indeed, on its own this latest Penguin update will only seriously affect about 1% of searches.

Penguin’s bigger brother Panda has been throwing his weight around since 2011, focusing less on spamming and more on the quality of content online. Its first incarnation alone affected around 12% of all searches. That’s a lot. About 12 times more than 1% – no need to thank me. 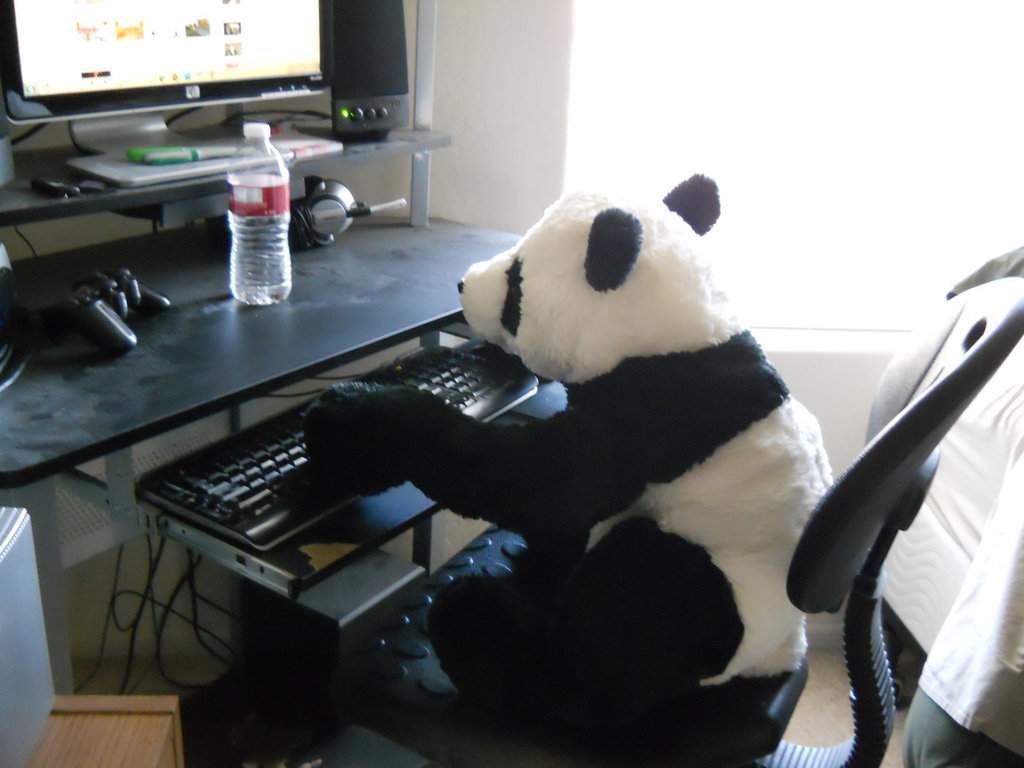 Where’s Jim? This is not what I had in mind when I asked him to make our website Panda friendly

Panda and its various updates, of which there have been dozens, reward sites with in-depth original content that is valuable to the reader – content that is not stuffed full of keywords, duplicated elsewhere online or drowning in ads.

But the really big news is that Penguin and Panda are only two cogs in a much bigger wheel.

The pair now form part of another – newer – algorithm called Hummingbird. And it’s a biggie. Launched in late August 2013, this new kid on the block affects approximately 90% of all search queries.

Hummingbird effectively plays the role of Google’s beating heart, with Penguin and Panda acting like humble valves that control the flow of what comes in until a better, updated version takes their place every few weeks or months.

The main goal of this new algorithm – one of the most significant of all time – is to help make people’s experiences on Google more natural. More like conversations.

Hummingbird updates effectively give Google a better understanding of the concept of human language – the way people string sentences together – rather than just the meaning of certain words.

As a result Google realises people are not merely searching for a keyword, but for the answer to a question. It not only understands traditional keywords like ‘car garage London’, it has a better understanding of how to answer questions like ‘where can I find a car garage in London that is open now?’

Next thing you know, robots will be trying to take over the world, a vacuum cleaner will be in charge of the White House and Will Smith will be the only one left to save us. But don’t fear – he’s blatantly got it covered.

To be rewarded in this brave new world, websites need to answer a searcher’s query as helpfully as possible rather than simply reproduce a word they have used in their query in parrot fashion.

They will also need to be increasingly mobile friendly – it was abundantly apparent at the launch of Hummingbird that the bigwigs at Google are well aware of the increasing role mobiles play.

Recent research from Telemetrics suggests that 50% of people start their search on a mobile device and this number keeps going up.

But that’s enough of Panda, Penguin and Hummingbird. The bottom line is it’s becoming nigh-on impossible to trick the system. So our advice would be as follows: stick to those dos, steer clear of those don’ts and make sure you are sitting comfortably the next time the music stops.